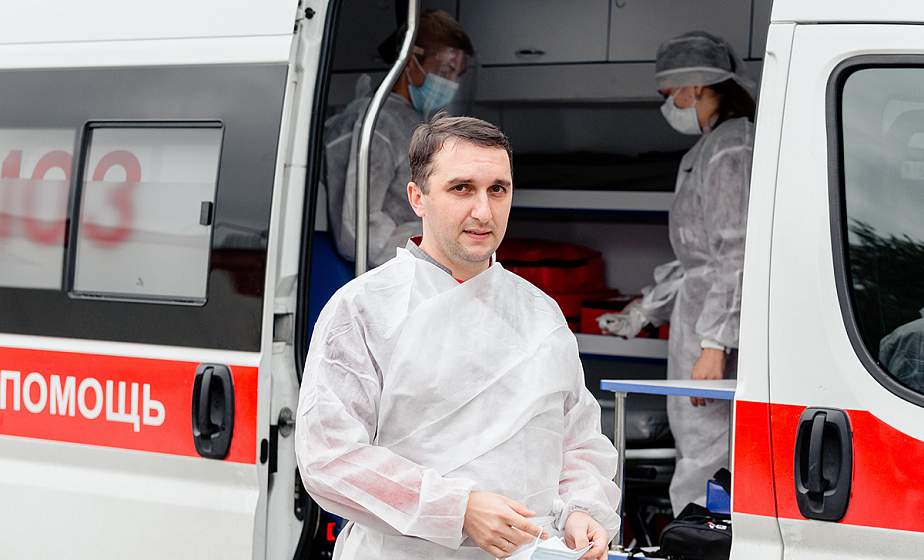 Alexander Gadomsky has been working at the Grodno regional ambulance station for 9 years. He says that in the morning, in the afternoon and in the evening, until 1:00 am, calls are usually received so often that you have to move from place to place with almost no break for rest, and only drop at the substation to replenish medical packages.

Traditionally, the focus of the intensive care team (consisting of a doctor and two paramedics) includes patients with acute heart disease, stroke, asthma attacks. The work of doctors previously required a lot of time, but now additional nuances have appeared:

— A call to a patient with a heart attack is an hour and a half. Stroke takes at least 2 hours, because such patients need additional diagnostics on a computed tomograph for the last year and a half, reveals the features of his work Alexander Viktorovich .

During the conversation, a call comes in: an 85-year-old patient has a heart rhythm disorder. Before leaving the substation building and getting into the car, we carefully equip ourselves: we put on disposable gowns, hats, gloves, masks. We keep protective screens ready. As Alexander Gadomsky explains, today even a call with a reason for «heart attack» cannot be considered safe in terms of coronavirus.

We drive up to a multi-storey building. It is possible to get into the entrance only after a few minutes: the intercom does not work. The neighbor, who came down to open the metal door at our request, recoils in fright when she sees us in full protective gear. We hastily explain that everything is in order, and take the elevator to the 4th floor.

They are already waiting for us there. The patient’s daughter describes the symptoms in detail, provides a medical statement and a dozen packs of pills that her mother takes. Alexander Gadomsky with an experienced glance determines: the patient should be more careful to adhere to the recommendations of the district doctor. By order of the doctor, the paramedic gives an injection, and after waiting for the normalization of the condition, we leave. The family refuses hospitalization.

As soon as we manage to get into the car, a new call comes in: a 32-year-old man with a pain in his heart. The doctor shakes his head doubtfully: serious heart problems at this age are rare. Maybe in a different situation, without a cleared covid, it would be possible to send a paramedic team to take an ECG, but now in such cases a doctor is required:

— If in the summer such brigades as ours left 5-6 times per shift, now it is 17-18. People are calling: the temperature has risen to 37 degrees. The number of calls has clearly increased. Many turn to because they do not know how, for example, to bring down the temperature or to distinguish a heart attack from intercostal neuralgia, and someone simply does not have drugs.

This is exactly what happened in our case. A 32-year-old patient presented with a pinched nerve. The next challenge is high blood pressure. Alexander Gadomsky emphasizes: the case is not for the intensive care brigade, but since we are already nearby … And then literally a minute later, in the dynamics of communication with the dispatcher, it sounds: «Cancel». An urgently needed help is a 28-year-old guy who just had an EKG at home during a visit by a paramedic from a polyclinic showed atrial fibrillation. A minute later, a more accurate diagnosis comes: flutter of the heart ventricles. The doctor concentrates, gives the command to «turn on the mirror», after which the flashing beacons on the roof of the car are lit.

— Very. To explain in simple terms, now the ventricles of the heart of the guy we are going to are contracting at a frequency 2-2.5 times higher than normal. This is a colossal load that the body may not be able to withstand at any moment. In fact, a person without medical assistance has from a few minutes to several hours of life, depending on the characteristics of the organism. This month I have had such a difficult case only once. Then I had to resort to electrical impulse therapy. But instead of restoring the rhythm, the 60-year-old patient went on asystole, that is, he died. As a result of resuscitation, the heart was brought up, the rhythm was restored, brought to consciousness and brought to the cardio center.

Meanwhile, we arrive at the address. The patient lies on the bed, the paramedic who performed the crucial ECG is still in place. Work began to boil. One paramedic of the brigade conducted an examination (ECG, saturation, tonometry), the second one after another broke off the ampoules and collected syringes — injected the medicine. While the salvation was going on, the patient’s wife, at the direction of the doctor, was packing her things to the cardiology center, where he needed to be urgently delivered.

Finally, after the treatment, about half an hour later, this question was answered positively. The patient is placed on a soft stretcher — in fact, it is a canvas made of rubberized fabric with loop handles made of strong tape. The guy’s weight is 85 kilograms. Therefore, the entire team is connected to the carrier: a doctor, both paramedics, a driver. The young man urgently needs to be transferred under the supervision of specialized specialists.

For our shift, Alexander Gadomsky has already saved his second life. The first was a woman with a severe asthma attack, whose condition worsened right before our eyes. The index of saturation, blood oxygen saturation — 77. With huge doses of drugs and «on oxygen» it was possible to raise it to 92. The norm is 98-100. The team was able to take the patient to the intensive care unit of the university clinic.

So, practically without interruption, we skated the entire shift. Only on the way to the substation smiles began to appear on the faces of the team’s doctors. They had to work the whole day in a state of tension and concentration.

— For 9 months of this year, there were 102 191 calls, while for the same period of 2019 — 98 107. Nevertheless, there is nothing critical in this. We are working, we are coping, despite the fact that the volume of transportation of patients has increased due to patients with coronavirus. We have 36 brigades, we work with the same composition as before. As for the specifics of providing assistance with COVID-19, we have a sufficient number of overalls, gowns, masks. True, if in the first wave people helped, sponsors (they brought, brought us personal protective equipment), now we are coping on our own with the help of the health department of the Grodno Regional Executive Committee.