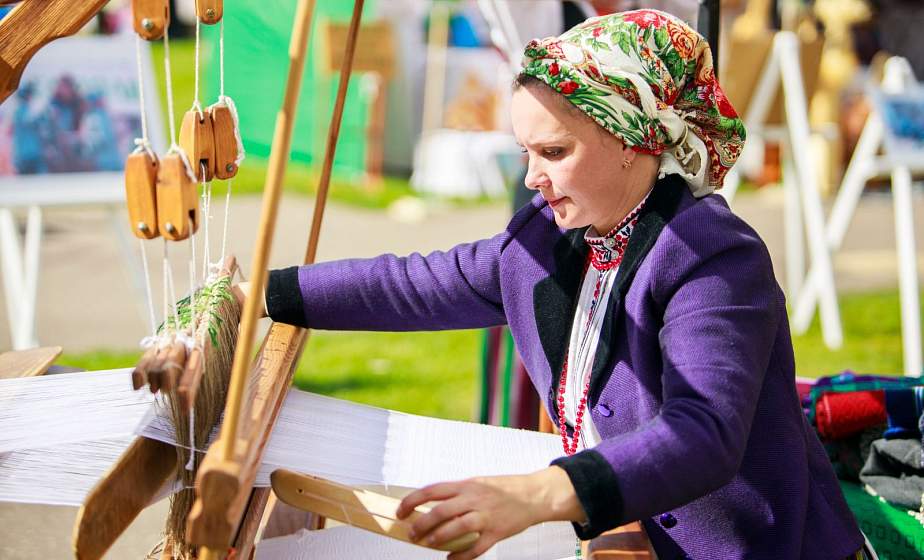 Artisans try to preserve the traditions of hand weaving.

Artisans try to preserve the traditions of hand weaving.A huge loom in the hall, looking like a museum one (from the abundance of exclusive products — author’s note), not just decorate the room. Weavers of the Department of Crafts and Traditional Culture ValentynaSilvanovich and MariyaShilkovskaya spend a lot of time at it, perfecting their skills and reviving the patterns of half-forgotten authentic art. 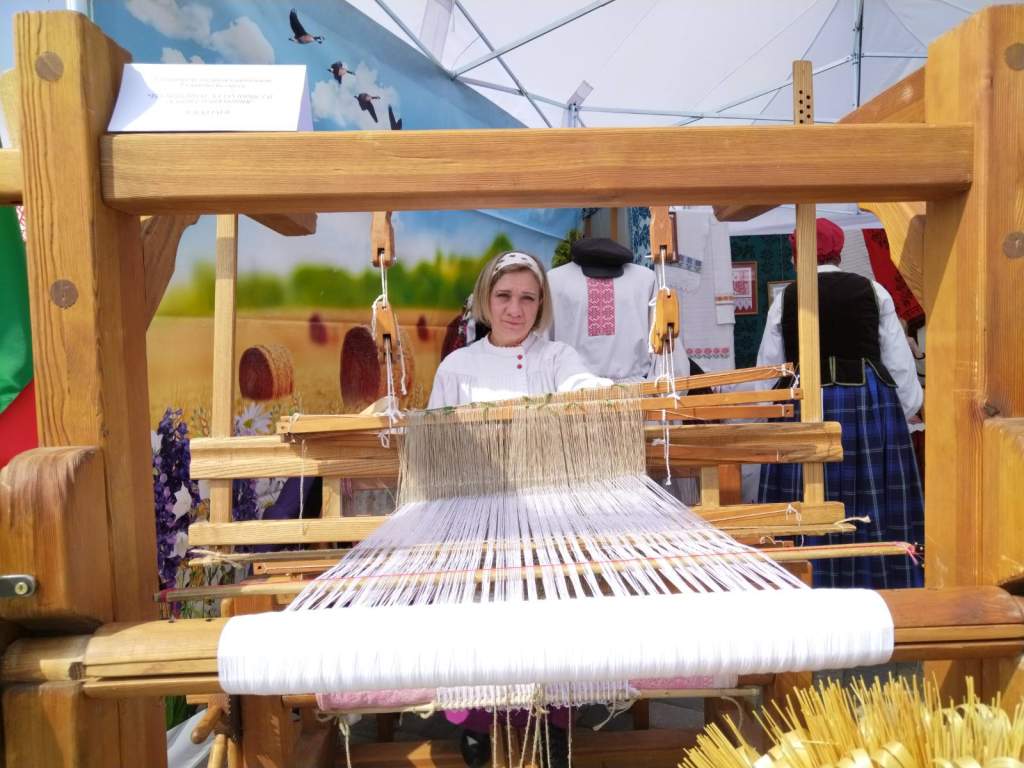 — The soul of the Belarusian people is also embodied in its arts and crafts, says Valentina. — It’s almost impossible to find even great-grandmothers who could show you how to tuck the loom and weave. We are trying to preserve hand weaving and become a link between the past and the present. 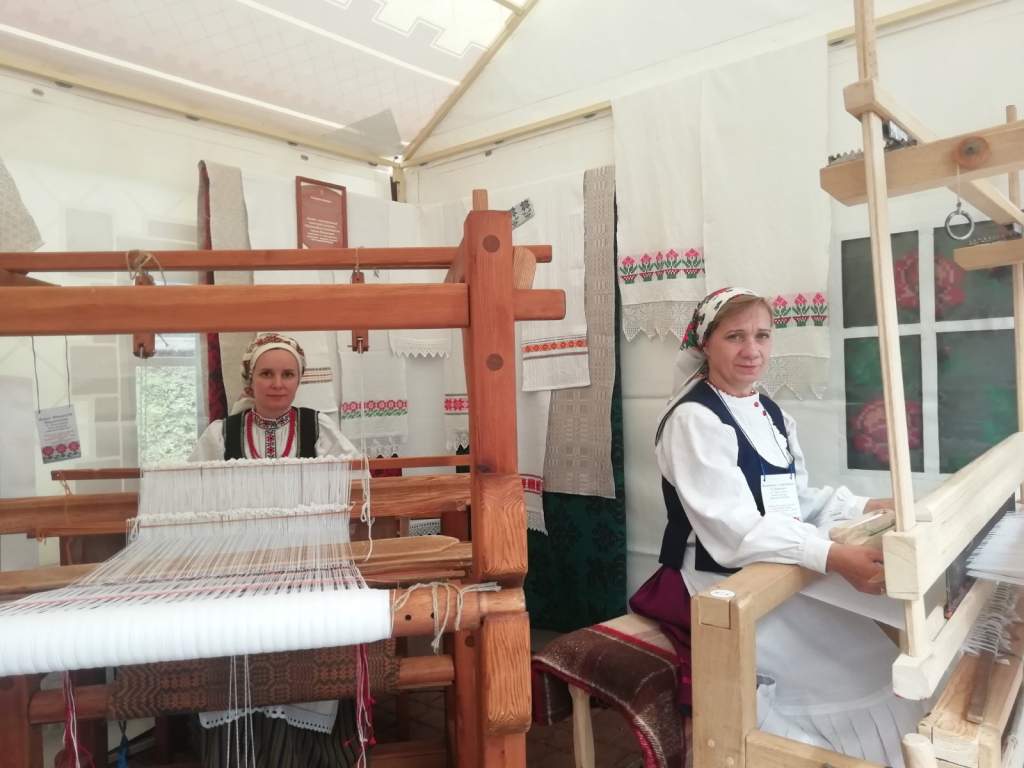 Masters scrupulously studied the patterns and weaves on goods inherited from their ancestors, mastered the white patterned weaving, common in the Lida region, and relied on it. A collection of folk costumes woven by weavers’ golden hands caused a rapture! It was exhibited even in the Palace of Independence. And their other products always stand out at all kinds of exhibitions and festivals. 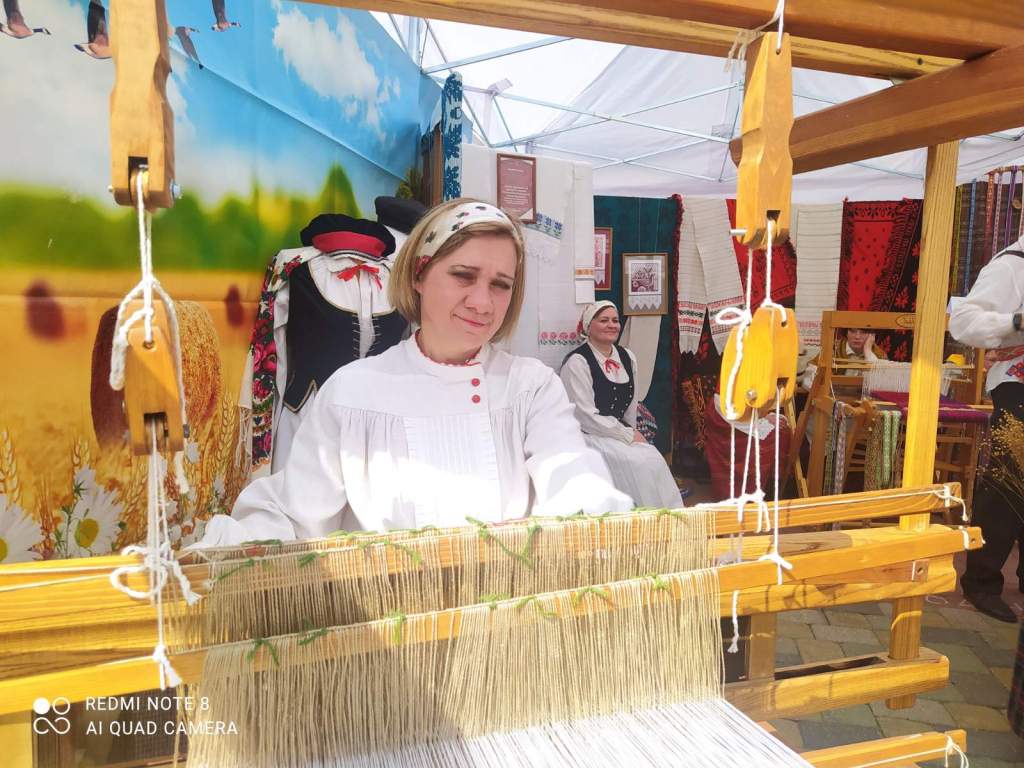 «Daddy made the crosnas for me himself».

Valentina Silvanovich is a teacher by training and joined the center of culture in 2012. Having worked as a seamstress for several years, she had the opportunity to become a student of weaver Evgeni Markievich and his follower Daria Matashuk, who were the first in Lida to revive the ancient craft. 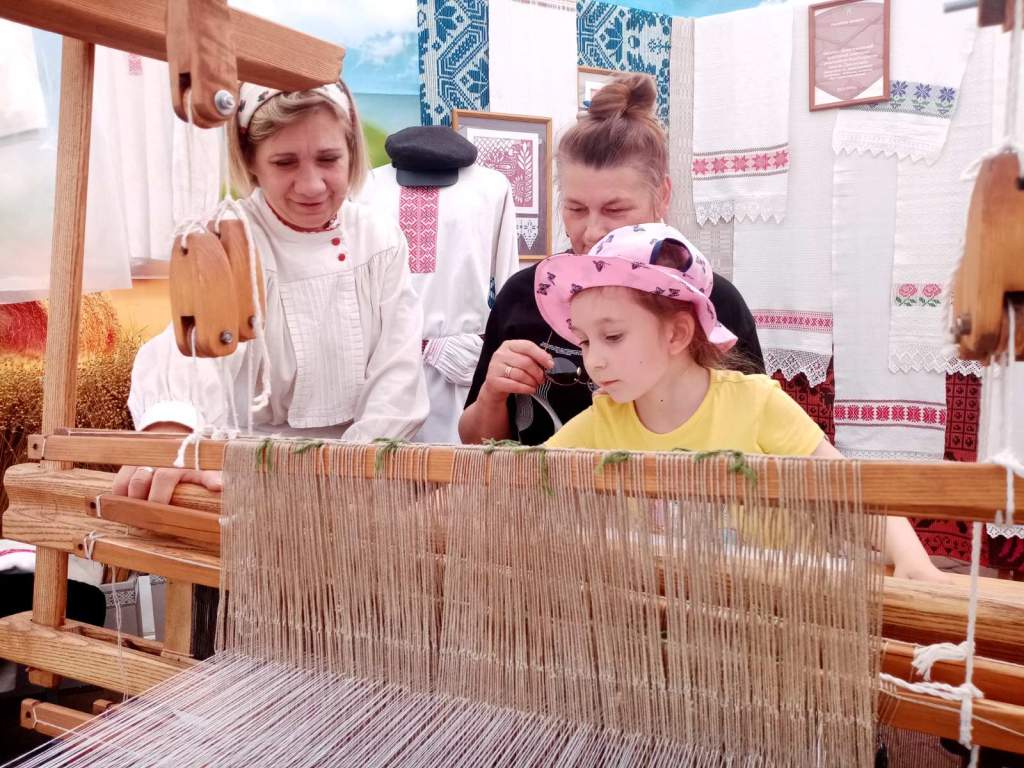 — I was fascinated by it, says Valentina. — I learned to weave quickly, and I have been doing my favorite thing for eight years now. It is a joy when you see the result of my labor. I weave towels, bedspreads, mats and belts, but I especially like to try something new. I also learn new techniques. Seeing my enthusiasm for weaving, my daddy — a resident of the village of Voyshchuki, Shchuchinsky region — made small crosnas for me, which «found their home» in my city apartment. My family supports my hobby.

«I fell in love with this difficult craft.»

Maria Shilkovskaya is also a creative person: she crochets and weaves with straw. In 2001 she graduated from the Mir Art College and was sent to her small motherland — the Lida district. She led circles in the House of Crafts and the House of Handicrafts in Pervomaiskoe, and when she got into the craft and traditional culture department of the Lida district cultural center, she became interested in a new kind of creative work — weaving. 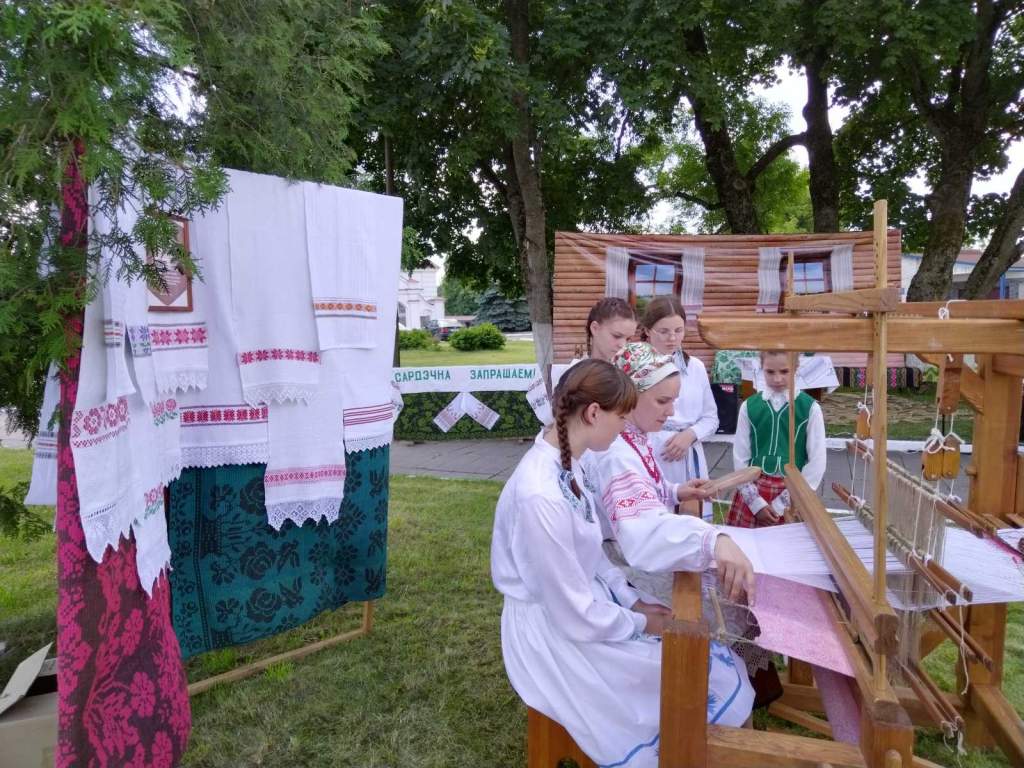 — I remember in our village of Chodorivtsi, where I grew up, there was an elderly woman from the same village who was famous for her woven goods,» Maria recalls. — When I asked her to show me how to make the crushers, she brushed me off: «You do not need to know this, child, it is very hard work, times are different now, you can buy everything ready-made. But it so happened that I fell in love with it and for three years I have been mastering this difficult profession under Valentina’s guidance. 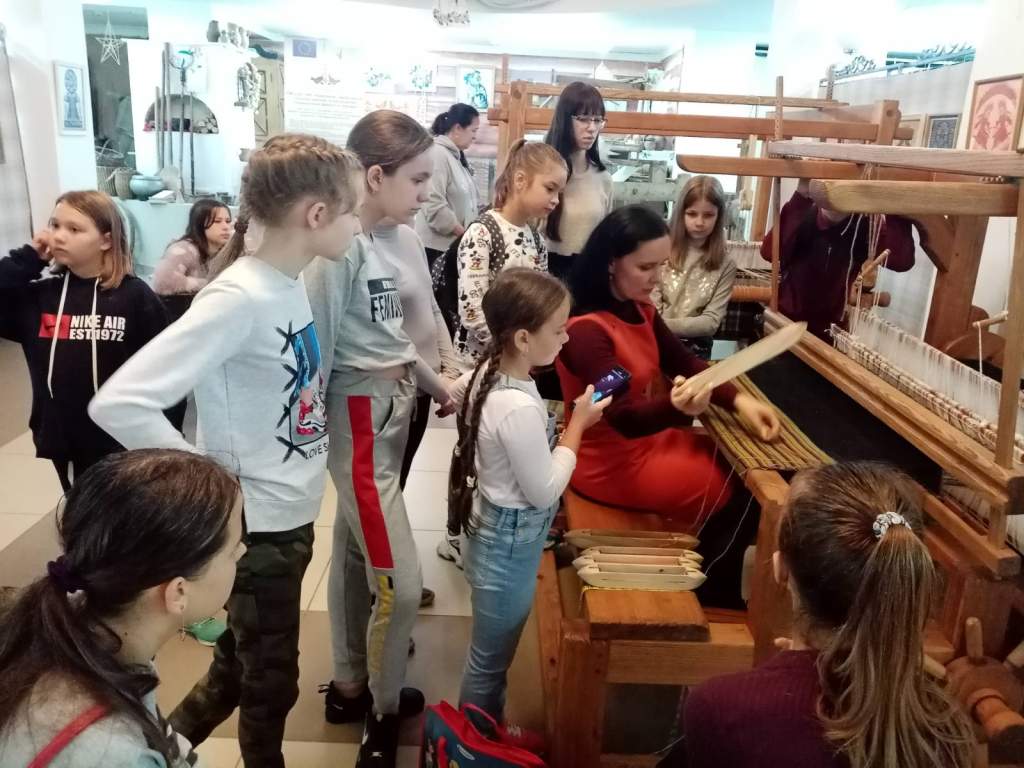 To preserve the historical memory and to show the forgotten process of hand weaving, the center’s employees organize excursions for children and adults, travel around the region with krosnas. Recently they were in Wawerk. We gave children the opportunity to sit at the loom and see how true beauty is born. Maybe someone will have a desire to engage in this folk art in the future. 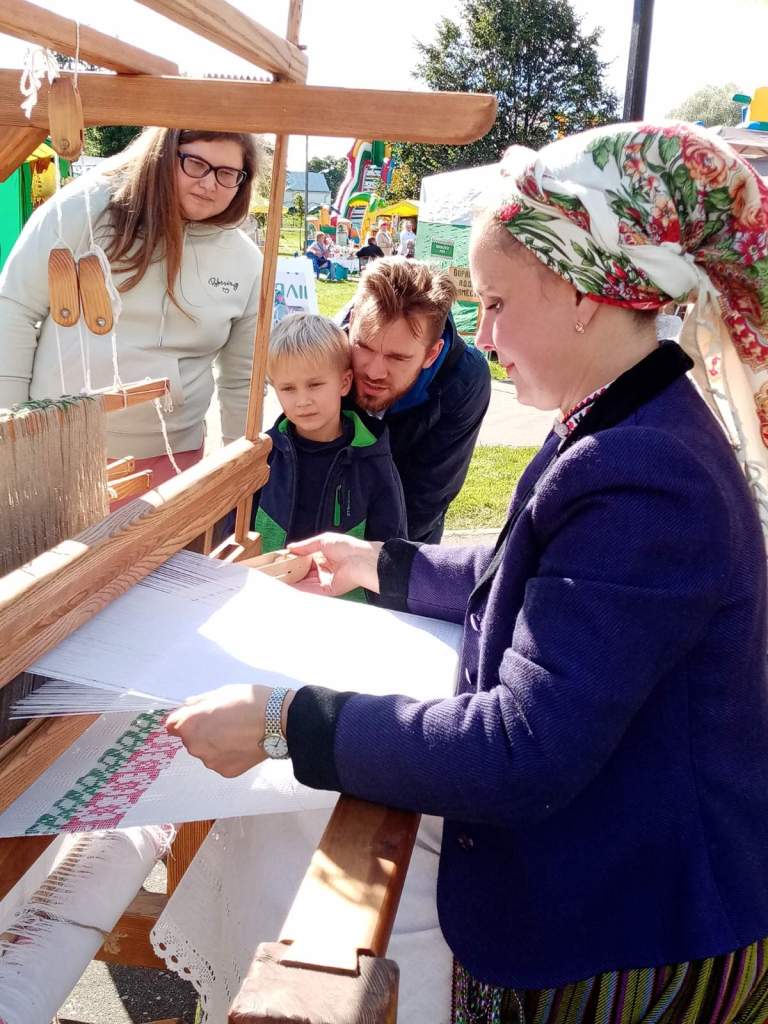 At the Forum of Regions in Grodno, where the residents and guests of the city went with a small loom, they admired the beautiful creations of the masters. And one representative man decided to sit down at the crosses and… tried to weave. He turned out to be a director of one of the weaving mills in the country, where the process of weaving is automated and up-to-date.

And recently Lida weavers conquered Vitebsk. In the International contest of masters of traditional weaving «Palatnyanyya peraplety-2022», which was held within the framework of the arts festival «Slavic Bazar in Vitebsk», they presented a towel made in the technique of white-weaving, which in 2018 was awarded the status of intangible cultural heritage. Valentina received a diploma of laureate of the first degree in the nomination «Revival of a rare local weaving technology,» and Maria received a diploma for the revival and popularization of weaving traditions. The loom, on which the women gave master classes, was crowded. 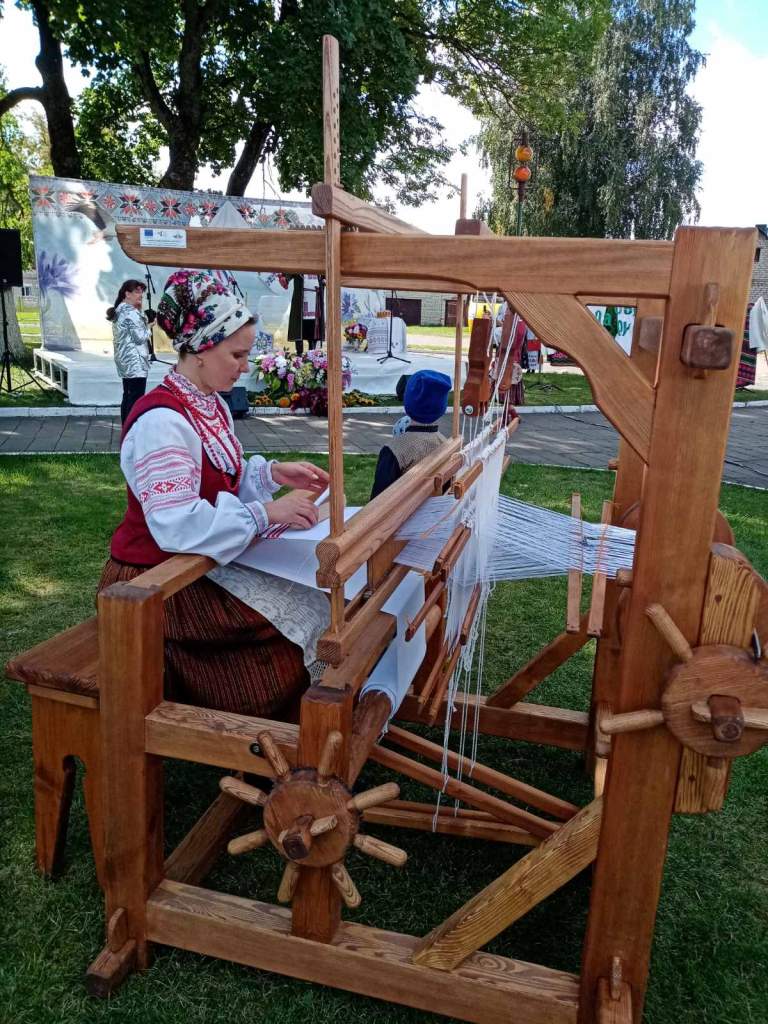 Weaving is more than a hobby for the Lida weavers. They confess that it is something very important, something that connects them with the past — something that makes them feel Belarusian and heirs of the richest history and traditions.

— The textile they weave is unique,» Elena Schelina, head of the department of crafts and traditional culture, supports the conversation. — They do a very important thing: they revive the old traditional technologies, restore complicated artistic patterns. They weave a new story, which is associated with the yesterday’s Belarus, ancestors, roots and centuries-old traditions.

Фото:from the archive of heroes

A living thread of traditions. Artisans of the Lida District Center of Culture and Folk Art revive the most complex artistic patterns in the style of white patterned weaving